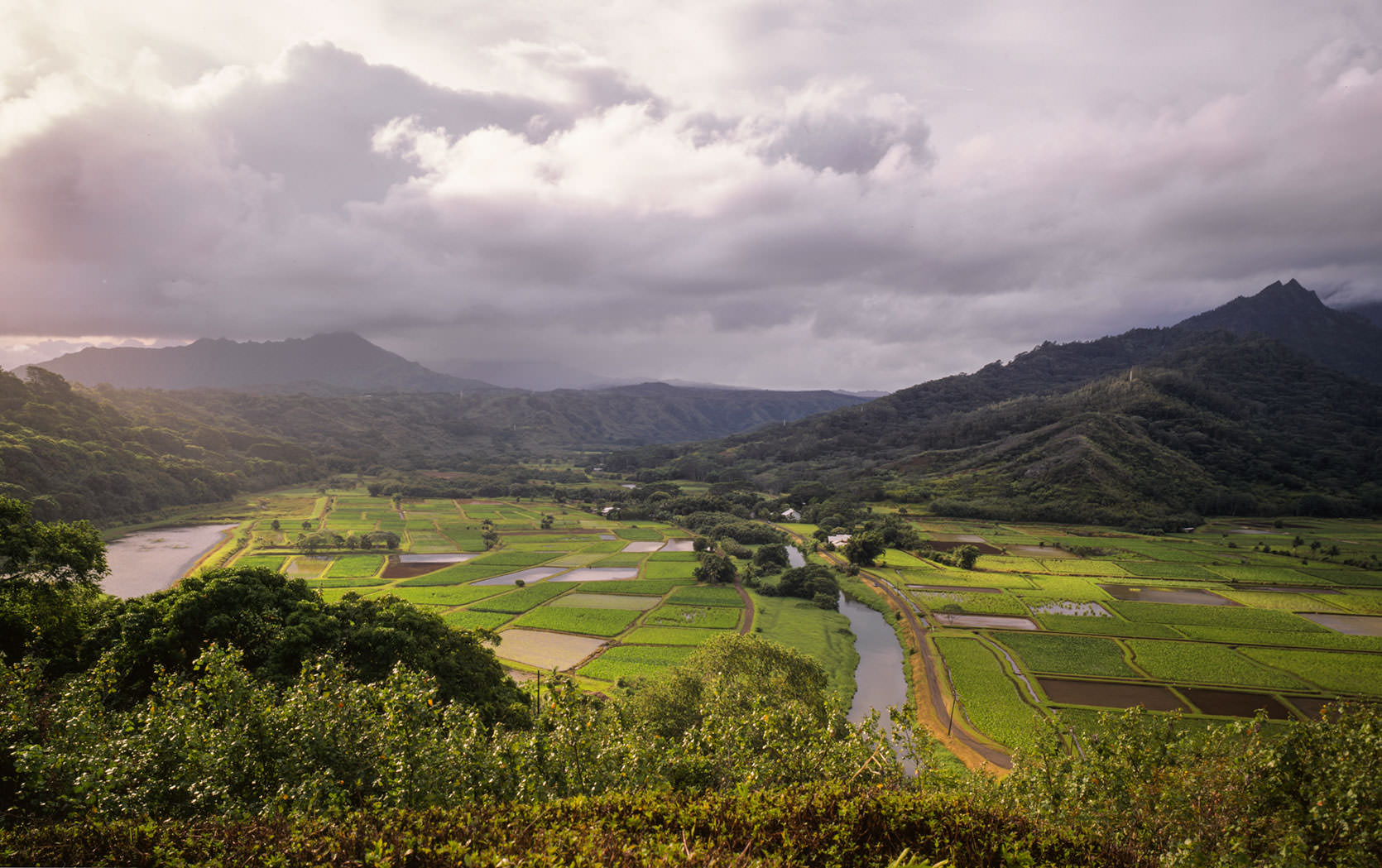 Notes on Kauai's north shore. During 'adventure drives' with my son, I discover a dark cloud hanging over the local coral reefs, one that is all too familiar.

After a long morning and the whole family winding down, I had slipped out of the house with my five-year old son, promising an ‘adventure drive,’ which is secret code for rolling down the windows and pretending any number of fantastical beasts are hot on our heels.

The setting is perfect for that on the one-lane road through the taro ponds, and we’ve parked the jeep on the road’s only single-car pull-out.  Here is Hawaii’s greatest diversity of wetland birds; wonderful bird names, like the 'Alae Ke'oke'o, abound, and egrets flock in front of steep, green mountains, where lazy waterfalls cascade in the distance. 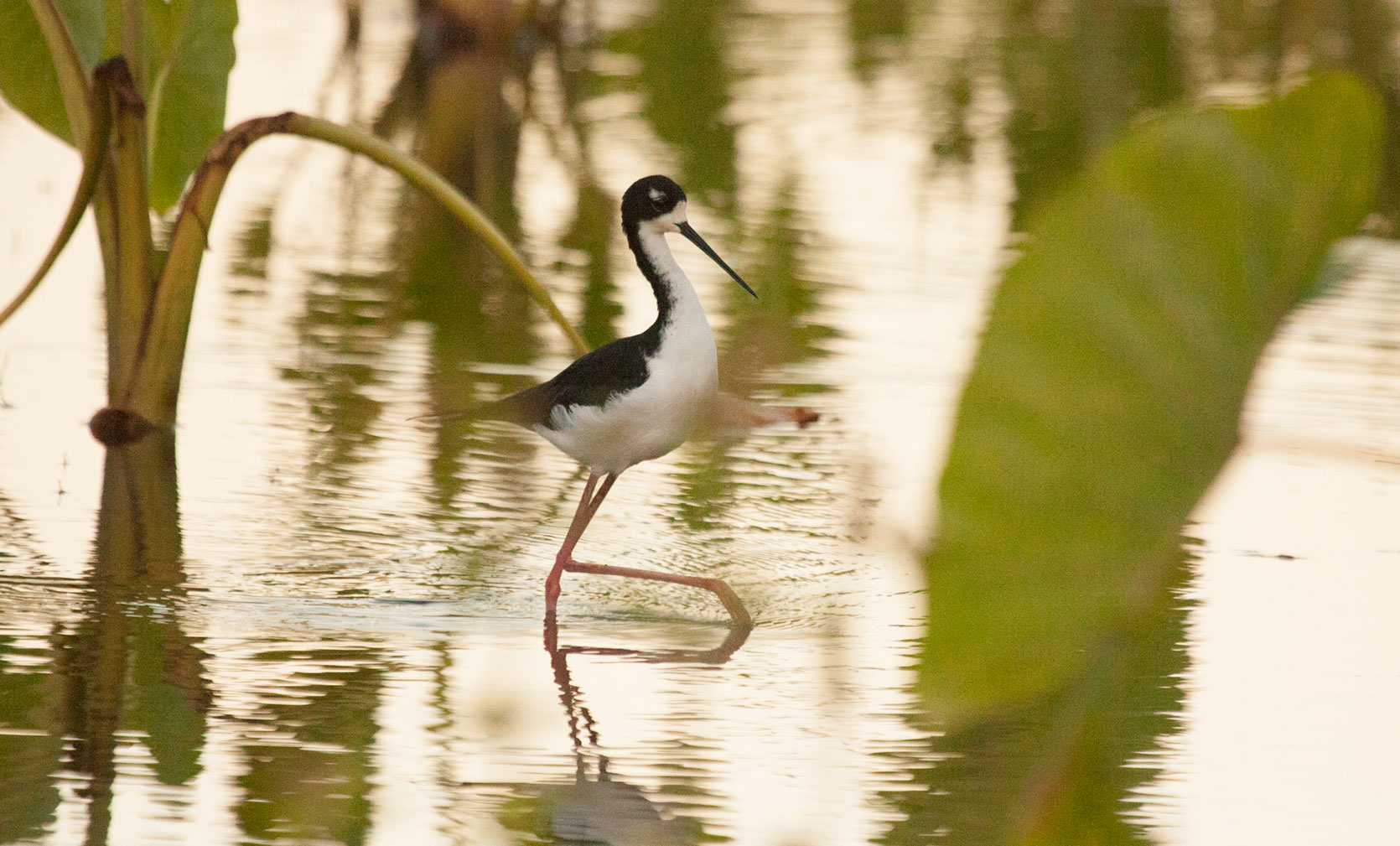 A Hawaiian Stilt, or Ae'o, wades through taro ponds in the Hanalei Valley.

I treated the Ae’o; Hawaii’s native subspecies to North America’s Black-necked Stilt, as if it were a small dinosaur, which taunts my son into appreciating the spectacle of it.

While my boy hangs out his window, I look out mine, and I notice the ridgeline above Hanalei, formed by the river which rambles through these taro ponds.  Although we can’t see it from here, above that ridge is Princeville, the magnificently large golf resort megadevelopment, where we have rented a house.

Since 2005, I have been following the story of a golf megadevelopment in the Bahamas, and its effects on the nearby coral reef.  So, something deep inside my brain tells me to apply what I have learned to the ridge I am looking at now.

This river, I tell myself, is formed high up in Kauai’s mountains, and flows through undeveloped forest until it meets these traditional taro ponds.  The shape of this entire area; the half-moon bay of Hanalei, the ridge above me; the fertile lowland which surrounds Hanalei Town, is shaped by the river.

And the river jettisons into a bay filled with coral reefs.  Those reefs form the vital surf and snorkeling epicenter that fuels the North Shore’s tourism industry.  For just a moment, I wonder…wouldn’t it be inconvenient if that golf course up above the ridge drained into Hanalei River?

Anini Beach, where forty-percent of the corals are infected by a cyanobacterial infection.

I erase the thoughts from my mind.  I was here to spend some time with my family, to spend time swimming the reefs.  I’ve been writing about reefs more than swimming in them, and I thought that ought to change.

A week later, we were returning home, and at the Seattle Airport, I caught up on the news, and was surprised to see a headline from the Los Angeles Times about Hanalei.  The headline: “In Hawaii, a coral reef infection has biologists alarmed.”

That’s strange, I thought, but not wanting to mix vacation with drama, I ignored the headline.

Back home, however, I see the headline again, this time not in the news, but through the chitter-chatter of coral reef conservationists, and I decide to peak into the subject. It wasn't just another reef on Maui or Oahu. This time, it was the coral reefs of the North Shore of Kauai, right where I had just been.

An unidentified white growth has suddenly blossomed into a full-on attack on the coral reefs of Kauai’s north shore, and the rate of reef decline has been unprecedented, especially for Hawaii, where reefs have seen decline, but not the kind of coral reef nightmares seen in places like Jamaica.

I read further in the Los Angeles Times article, which states, “biologist Terry Lilley, who has been documenting the phenomenon, says it now affects 5% of all the coral in Hanalei Bay and up to 40% of the coral in nearby Anini Bay.

Mushrooms cling to the steep rocks above Haena Beach.

Something about that statistic bothers me, especially as I start to read other accounts of the reef decline in Kauai, which seem to suggest that agricultural run-off is the default culprit to blame in any instance of Kauai reef decline.

Coral reefs are unique ecosystems in that their survival depends upon a certain set of conditions from the nearby land – namely, the reefs require a near absence of nutrients as well as other land-based stressors, such as silting, or land-based pollution.  Such stressors are often not directly responsible for killing a coral reef; but rather for weakening a reef’s defenses against disease.

A cyanobacterial disease such as the milky-white infection plaguing the north shore reefs doesn’t just happen.  It requires existing stressors.

My son and I had driven to the end of the road through the taro ponds.  The small road ends abruptly, at a lonely driveway.  How could agricultural run-off be responsible for this reef decline?  Those taro ponds have been here, virtually unchanged, for hundreds of years. If agriculture is to blame, then these taro ponds are to blame. I don't remember any agriculture deeper inland from here.

I pull up Google Earth, to get a sense of how agriculture might be affecting these reefs.  I splice together screenshots to create a larger satellite view of the area.  When the images are all spliced together, what I see stuns me. 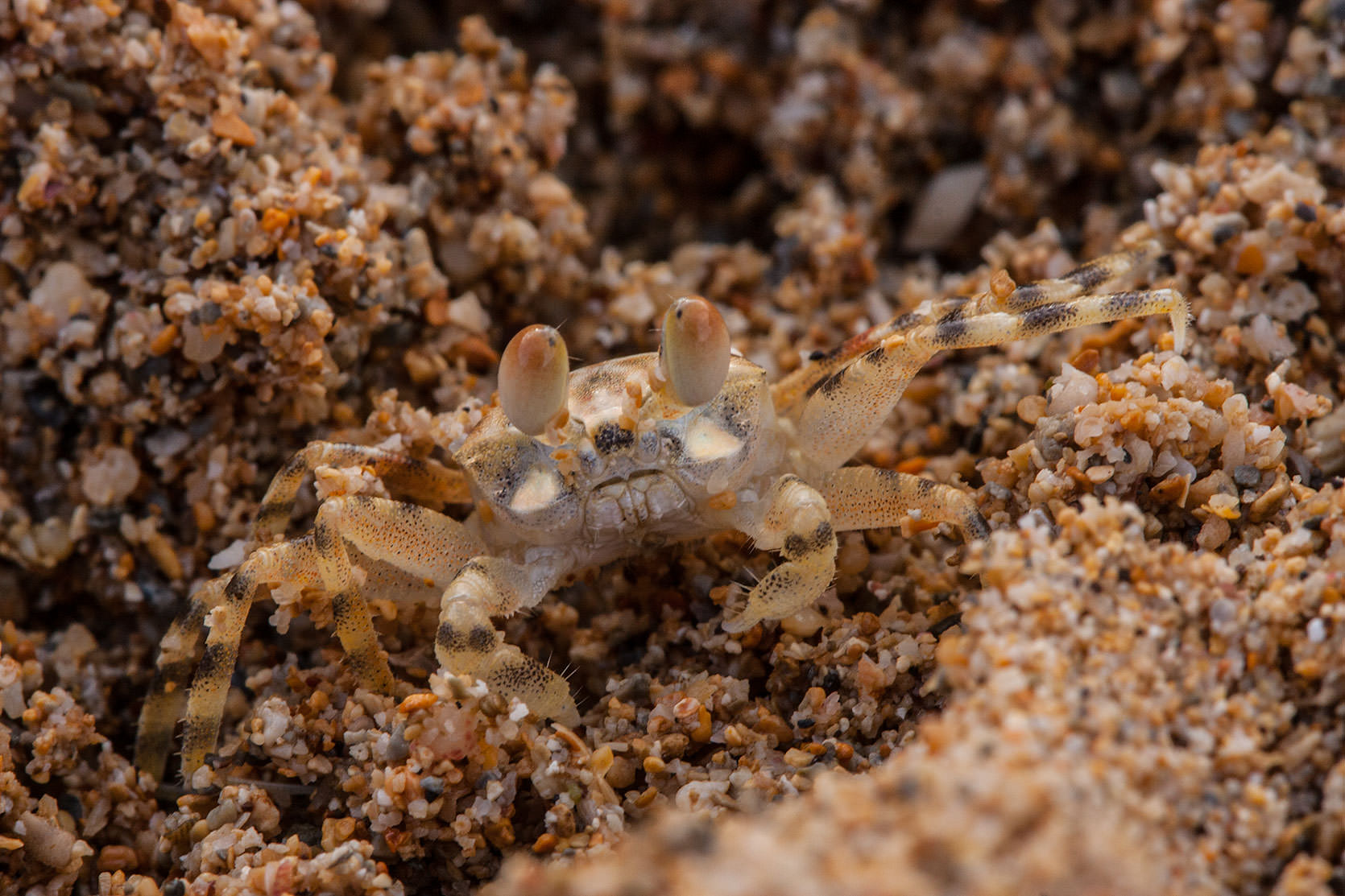 A beach crab hides in the sand near a drainage from the golf course, at Anini Beach, where reef damage is being reported.

Not only is the agricultural footprint in the area that affects both Hanalei Bay and Anini Beach extremely small, the bulk of the coral reef damage is at Anini Beach. There is no agricultural run-off at Anini Beach. I decide to show my graphic to local environmentalists and scientists in the Hanalei area, all of whom are quite alarmed with the recent news. Many of the people I contacted are to speak at a public meeting on the reef decline in only a few days.

Many have their own theories as to what land-based stressor might be behind the decline. One writes, "The final answer to the puzzle is not yet known. Lots of possibilities but nothing conclusive yet. The strain of cyanobacteria is apparently a new variety, unique to Hanalei and the North Shore of Kauai."

One contact told me that Agent Orange had been developed and sprayed all over Kauai. In Hanalei, during the Vietnam era, a Ranch Manager from what has now become the Princeville golf development, had rolled fifteen unused 55-gallon Agent Orange barrels over the ridge, and into the Hanalei River. One theory is that forty years later, that agent orange is finally being released into the reef.

Others believe that cattle - roaming, pooping, discarding afterbirths, in the hills above Hanalei, with their many land-based diseases, may be the culprits behind the disease.

All of these theories will have their day as the research comes to light.. But when you look at the map, how likely are any of these agricultural scenarios? 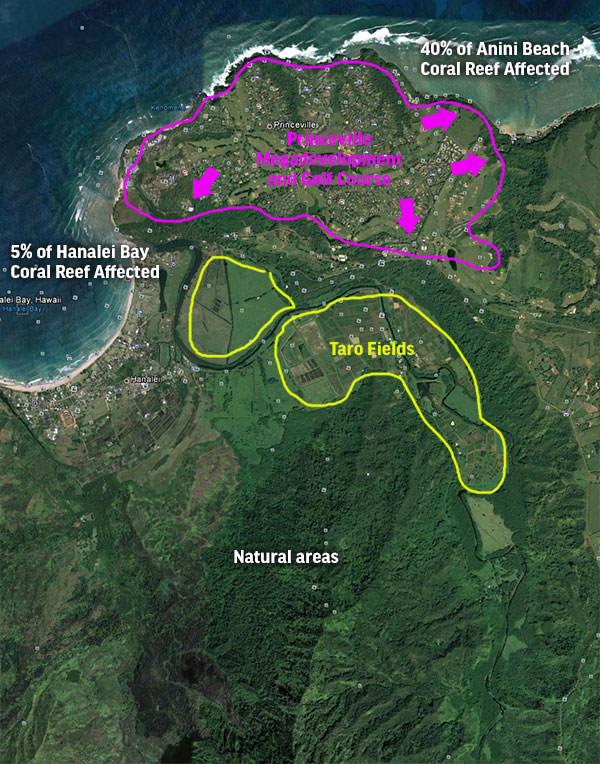 When I asked a respected Kauai coral biologist about the huge footprint that the golf course development had over Anini Beach, where the disease was most pronounced, the answer shocked me.

"All reefs have to deal with natural run-off," he writes. "It rains, mud goes onto the reef and then the corals clean off mud in between the rains. What is different about the golf course is that they water on the dry days and this water runs off onto the reef with all the fertilizers in it including Roundup with Atrazine!"

The mention of Roundup shocked me, because I had taken my son and nieces to Anini Beach only a few days earlier. A small stream trickled from the cliffs onto the beach, forming what I believed was a nice place for the kids to play. When the other parents saw the kids playing in the stream, they balked. I had just assumed that was natural rainwater trickling onto the beach. But I was wrong; the golf course was directly above us, and, insanely, they were using Roundup! 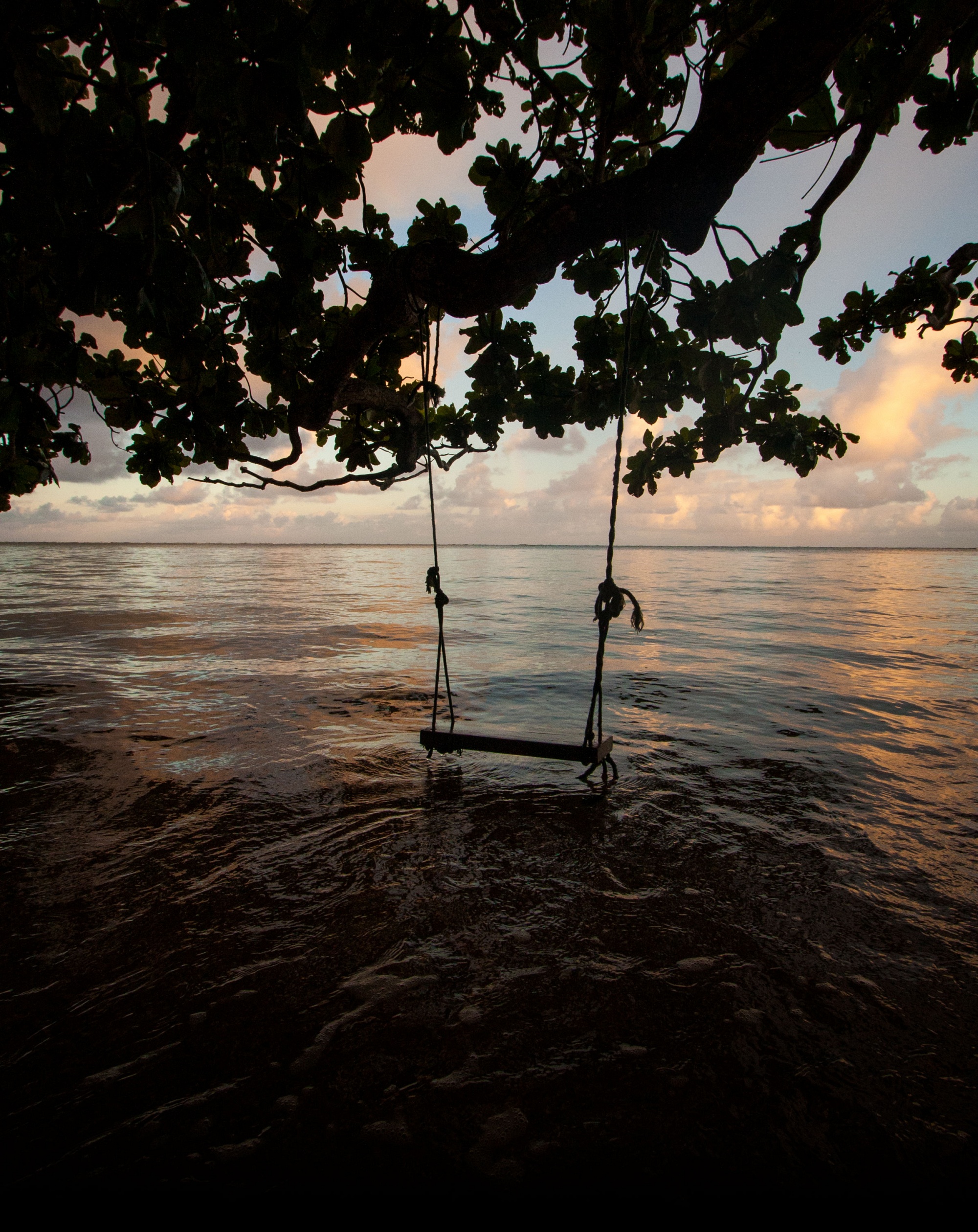 he biologist continued, "Anini Bay has run off, every day! This does not give the reefs time to clean off the sediment and toxins. I have located pipes that go under the golf course and flow directly into Anini. These pipes have very stinky, dirty water flowing out daily into the bay! Any development near the coast that waters large lawns to keep them green, will have constant run off into the sea. The corals cannot deal with this. These developments need to have run off collecting areas where the water is purified before going into the sea."

I had always assumed that what could happen in small West Indies islands couldn't happen in the United States; this country would never allow a golf course directly above a coral reef to use Roundup, and to allow their nutrient waste to trickle right into the reef.

It will be several months before the data will reveal our culprit. Until then, I'm placing bets.

Update: I wrote this article before learning that Discovery Land Company, the same golf course developer I have written about extensively in the Great Guana Cay Reef issue section of this site, was taking over management of this golf course development near Hanalei. However, the development later pulled out, citing mistrust over Discovery Land Company's environmental record.

In Kauai, I discover a dark cloud hanging over the local coral reefs, one that is all too familiar.

Illustrations, sketches and notes from my travels to the island of Kauai.

My Moleskine journal sketches from the north shore of Kauai Island in Hawaii.