This Flat Porcelain Crab is No Crab 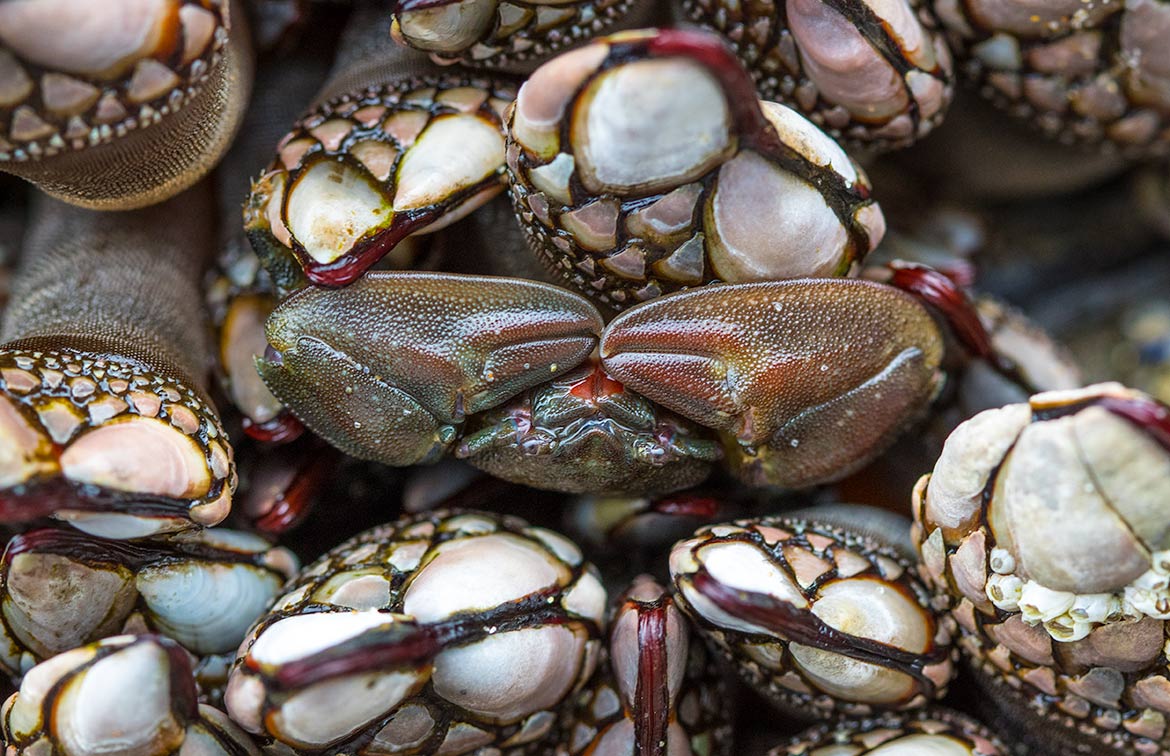 What is this strange creature that has embedded itself safely and tightly among these Gooseneck Barnacles? Well, it's a Flat Porcelain Crab, but it's no crab. Let me explain.

It was a strong negative tide on the Oregon coast, and so we made sure to get down to Indian Beach at Ecola State Park as well before low tide as possible. On these unusual low tide days, if you can get yourself to the tidal rocks before the lowest tide, you can glimpse a world that is almost always several feet underwater.

Tidepooling in the Pacific Northwest does not always reward you with endless new finds. But consistently poking around brings discovery in regular doses. Typically, a good day of tidepooling will yield a species or two of befuddling new finds.

We weren't sure exactly what we were looking at when my nine year old son saw something move in the barnacles. But as it positioned itself to defend itself against us, that classic crab shape appeared. This new creature, unlike anything we'd ever seen, as it appeared so slim, was surely a crab. For me, that meant a new species, if only I could I.D. it.

When I did I.D. it, I learned that it was not actually a crab.

Ever since I was a kid, I've been obsessed with how aliens are depicted on the screen and in books. Most science fiction films depict aliens as humanoids: two arms, two legs, two eyes. Such an alien might be the Acamarians of Star Trek, who look like humans with a crease down the head.

If not humanoids, they are insectile, like the Alien series' Xenomorph XX121, or lizard-like, like the Gorn of Star Trek. Then there are the dragonish, like the Great Leonopteryx of Avatar. Others are Mammalian, like Wookkies, TaunTauns and Ewoks.

The Earthization of science fiction creatures has always bothered me, because I have always assumed that any creature from another planet could not resemble anything from Earth. I've sought out sci-fi creatures that I thought plausible.

One creature that has resounded for me is Return of the Jedi's Sarlacc Pit. No heavy borrowing from Earth creatures, and without exaggerated proportions, the Sarlacc Pit is a tiny dose of true invention.

Through the course of my lifespan, I've begun to doubt my initial assumption that life on alien worlds will not resemble our own. The more examples, I see, for example, of convergent evolution, where two completely separate evolutionary lineages come to resemble each other, has made me ponder if the rules of physics and evolution would tend to create alien life resembling forms we recognize.

Flat Porcelain Crabs are great examples of convergent evolution, because they are not actually crabs. They are crustaceans that share an evolutionary lineage with lobsters, but which have evolved into creatures very much resembling true crabs.

So, the Flat Porcelain Crab is no crab, but its shape suggests that there are creature structures out there that evolution gravitates towards. So, maybe finding this Flat Porcelain Crab will help me suspend disbelief the next time a Sci-fi serves up a crab-like alien.